» Kultur » Oslo Pix is back with its 5th edition!

The film festival Oslo Pix is back from the 31st of May to the 10th of June. The program is fully digital, but some screenings will happen in the cinemas, thanks to the recent reopening! The program is full with debates and societal subjects, with 3 French films.

For the past 5 years, the film festival Oslo Pix has been the starter for the summer and, hopefully, sunny days. From May 31st to June 10th, almost 45 films will be available to watch online, during 10 days. The Institut français de Norvège is happy to collaborate with the festival for their selection of French films, which includes this year: Calamity by Rémi Chayé, Slalom by Charlène Favier an Monopoly of Violonce by David Dufresne. Two French co-productions are also available: And Tomorrow the Entire World by Julia von Heinz et Flee by Jonas Poher Rasmussen.

In addition to that, the documentary Monopoly of Violence will be followed by a debate, with 4 Norwegian participants: Bernt Hagvedt (professor of politology), Ingeborg Misje Bergem (Doctoral researcher specialized on French culture) and Torgeir Brenden (Oslo police), moderated by Tove Gravdal (journalist). An interview with the director, David Dufresne, will also be available in French with Norwegian subtitles.

Don’t miss out this new program, at the beginning of June, available everywhere online! 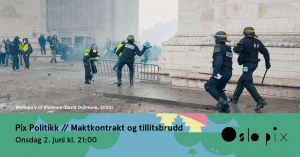